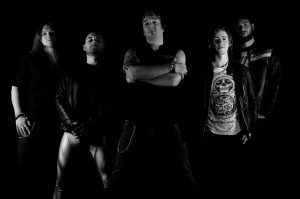 What is a band to do when they release an EP and send it out for reviews only to have it slated across the board by those they most respect?  Should they throw in the towel?  Maybe start trash talking those who gave the album not so favorable ratings?  Fill their eMail boxes with threats and childish retorts about their mothers and sisters?  Well, maybe some would, but in the case of Ireland’s Dirty Diamonds, you back up, take stock of what you have going for you and hit back with a vengeance by releasing Let’s Get Loud, a heart pounding twelve song affair of melodic hard rock fury aimed right at your skull.

Oh, and you become friendly with those who gave the EP a knock ….

“People often wonder why we took that route,” muses Dirty Diamonds drummer turned frontman, Jonathan Ryan.  “First off, well, we are adults so what did people expect us to do?  Taking to the internet to call them nasty names and make up lies about their mothers was my first idea but the other guys talked me out of it!  No, no, no, I’m kidding here.  Truthfully, what choice do you have when someone condemns your hard work? You look at it and ask, ‘What are the weak links here?'”

It was decided that the weak vocal and pretty boy frontman had to go. Ryan continues, “We needed to regroup and lose the more glam aspects and come back with something a little more ballsy and a little grittier. I was sick of my songs, my words being sung by somebody who didn’t even get what the songs were about and had no heart and I decided to step out from behind the drums and deliver the songs in the best way i knew how, by giving them balls and feeling every word as I sang them.”

Previous guitarist Jimmy Q, dropped off the face of the earth leaving the band a temporary trio, Jonathan Ryan (filling both the drum and lead vocal chores), Shane Moloney (Bass) and Alan Ranahan (Guitars) to finish the record. Drummer Joe Betts was recruited to finish the last 3 tracks on the album as they went back to work in Bow Lane Studios in Dublin (best known for giving the world Def Leppard’s multi-platinum ‘Retroactive’ release) with producer Tom Slattery (who had previously worked with Sharon Corr)..

With the album finished the dirty ones recruited a new guitarist in Evan Daly and went about gigging as much as possible all across Ireland and Northern Ireland, supporting Northern Irish heroes The Answer for a second time, as well as new contenders to the crown Screaming Eagles as well as many other great bands, including dates with Dio Rising on their Irish tour.  “Touring teaches you about humility,” observes Ryan. “You tell yourself it’s a live practice, you gotta get out there and hone your craft. And we have, it makes you tighter, gives you more confidence and makes when you actually play to a crowd all the more enjoyable. You relish playing to an audience and trying to win them over because you know how much worse it could be.

Let’s Get Loud itself encompasses everything Dirty Diamonds love about rock and metal music. “We decided from the get go that it should be something that is reflective of all our influences,” states Jonathan.  Songs such as “Want You to Want Me” and “Wakin’ Up the Neighbourhood” are reminiscent of Def Leppard and then you have tracks like “Crash & Burn” and “Against the Grain” which stray much further into the heavier territories of Pantera and Megadeth and “Paradise & Tropicana” features Foo Fighters and Journey as influences. “It wasn’t that we were trying to please everybody it was more like there is so much more to Rock n Roll as a genre than just pedal to the metal straight ahead rock all the time and we are big fans of the genre.”

The Let’s Get Loud cover art was created by local artist and animator Robert Hogan who also designed Dirty Diamonds’ “Harry the Bastard” range of T-Shirts which were an homage to that fateful review which put them in the eye line of such music heavyweights as Mick Wall, Joel McIver and Classic Rock magazine editor Scott Rowley. It’s a throwback to 80’s heavy metal when fans of the genre used to buy records based solely on their cover because they couldn’t simply log on to the internet and check out what the band was like.

“Let’s Get Loud is our statement of intent.” 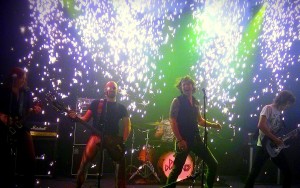