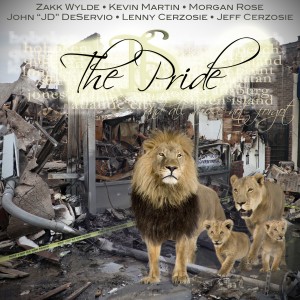 When tragedy strikes, the natural impulse is to lend a hand and do what you can do to help the affected persons ease back into normal everyday life. It’s just part of the human condition. However, when tragedy strikes your hometown and surrounding communities the ‘lending a hand” ethic takes a massive upswing and you immediately jump into high gear to get back to a sense of normalcy and peace of mind.

Such was the case with brothers Jeff and Lenny Cerzosie from the Staten Island, NY hard rock band The Infinite Staircase. Jeff recalls, “It was crazy. It still is. I mean, the devastation, the loss; you feel powerless. We were the lucky ones. My girlfriend’s uncle was trapped in his attic for almost 20 hours. Just him, his girlfriend and his cat. His neighbors were dead and he was surrounded by water and debris. We knew he was there but couldn’t do anything to help.”

Jeff Cerzosie soon jumped into action in another way, enlisting their friends Zakk Wylde and John “JD” DeServio from Black Label Society, Morgan Rose from Sevendust and Kevin Martin from Candlebox. Jeff also adds, “We’ve been friends with Kevin since 2005 when I reached out to him via Myspace about headlining a concert for Multiple Sclerosis that my family and I had put together on Staten Island. He was getting married about a week after the show, and still, he didn’t even hesitate to say ‘yes’ to me. That’s just the kind of guy he is.”

With everyone eager to help, all egos were checked and they set about to the task at hand. The only problem was, they had one shot and only one shot. What should they do, record a cover? Write an original song from scratch? A few cover songs were thrown into the mix and the project members began discussing The Rolling Stones’ “Salt Of The Earth” as the track to cut. (Everyone felt, not only is it a great song, but it’s a song that speaks to the hard working people or as Kevin Martin would say it’s “very New York/New Jersey.” Ultimately, everyone decided that a new song would be the way to go “Anyone can do a cover song and try and raise money for a cause. But we wanted to make a statement. We wanted to let the people who were hit by this storm know that they weren’t alone and that the music community cared about what was happening and they wanted to try and help in their own way.” and they set about putting together the track which would come to be known as “The Pride” Lenny Cerzosie says, “We (Kevin and Lenny) were talking about the chorus. So we were talking about the flooded streets and what the chorus has to be. It has to be the hope part. He’s like ‘These are our streets, this was our home’ And I said, ‘you know what, that’s awesome but what about These are our streets. This IS our home.’ ‘Cause even though it’s washed away, it’s still our home. He was like ‘Yeah, you’re right! Let’s do that!’ It kind of flowed where he said ‘Yeah, we are the pride.’ And I said ‘Yeah, because New York, New Jersey, Philly, you know, we’re all about the pride’ – he’s like ‘Yeah, but I’m talking about the lion’s pride. Like the lion’s den. Forget FEMA and Red Cross and everybody else – that we take care of our own. We’re here for a reason. We are the lion’s den, the lion’s pride, that’s what it’s about. It’s the roar. It’s the pride.'”

The musicians entered Architekt Music in Butler, NJ, where Sevendust had recently finished work on ‘Black Out The Sun” and The Infinite Staircase was in the midst of recording their new album. Studio owners George Roskos, Kurt Wubbenhorst and Engineer Mike Ferretti were more than happy to get involved in something that had also affected them and hit so close to home…
Lenny Cerzosie had actually written a song entitled “Slowly At Least“, which The Infinite Staircase and Morgan Rose had already begun recording for their forthcoming new album. With time short and schedules changing, it was Kevin Martin who, after hearing the demo cut of the song, thought the music would serve as the perfect arrangement for this project. With some fine tuning, melodic realizations and an intimate lyric writing session, everyone was involved and everyone was passionate about the song that was being created.

“The Pride” is a melodic harnessing of emotions that tells a story and carries with it a strengthening message of resolve and perseverance. It instills a feeling of honor and unity. Melodic, with an edge, “The Pride” is everyone at their best, because that’s what the communities effected by this storm deserve. It is a culmination of everyone’s musical offerings in a melting pot where not one talent overshadows another. Everyone serves their just cause and purpose.