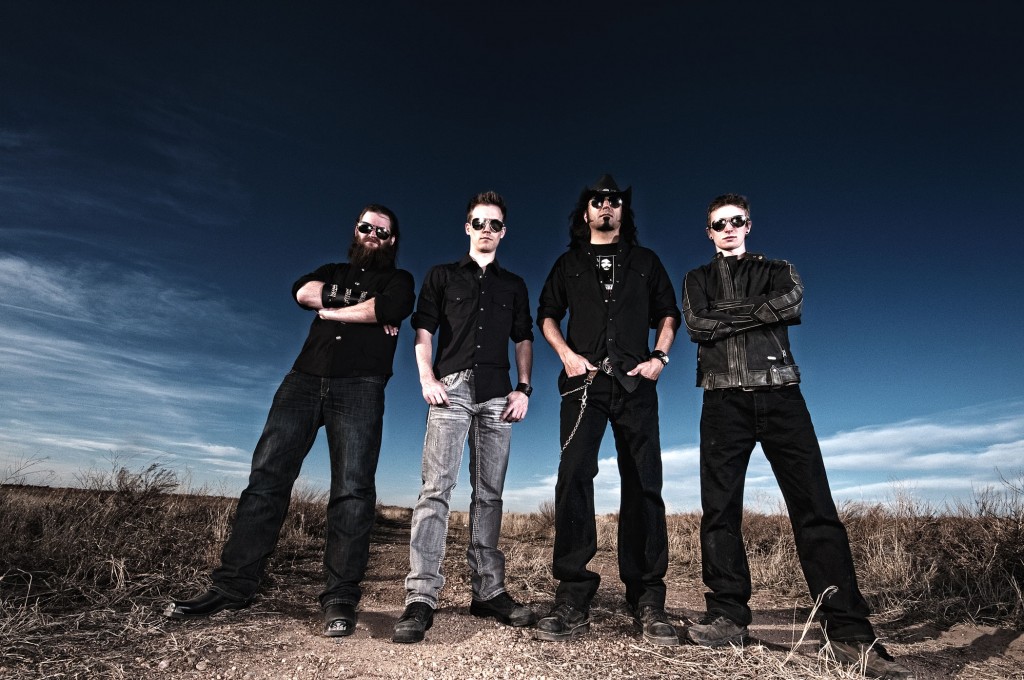 From the pen of Silencer founder, Keith Spargo:

Silencer started in 1998, at the tail end of the alternative & grunge movement and heartily in the middle of the American nu-metal wave. The band was simply an outlet to write and perform music we wanted to hear, but pretty much weren’t. Early influences were a mix between thrash and classic British metal. The music had intensity and often speed, but always pointed the structure, melody and crunch of classic metal. Lyrically we sought to explore everything non-cliche, adding some higher concept to our songs. After cutting our teeth in the local scene and even going on one patchwork tour of the southwestern US, the band settled on it’s first more stable lineup to write and record the band’s first EP, ‘Kozmos.’ A five song outing, it served as a studio-quality demo but also a retail unit to fund touring and anything else the band needed. It reviewed pretty strongly for a fairly primitive first step, and deep down we knew it was honest. Amidst a scene trying to play catch up to the nu-metal glut, ‘Kozmos’ ignored everything “popular” and gave the band the platform to really go out and do some damage. Copies were shipped worldwide to both direct buyers and a small slew of independent distributors both domestic and overseas. It also garnered the band their first festival appearances, namely Milwaukee Metalfest and the UltraSound Showcase. We sought to plug in and pummel every stage that would let us play. This EP was an important first step for the band.

After the ‘Kozmos’ cycle came to a close and being unable to secure a label deal, another five song EP was written and recorded. ‘Structures’ came out in late 2002, and even further cemented our reputation as an up-and-coming band to watch. We continued our road work, but did so in more concentrated week long tours or festival appearances as opposed to the more scatter shot approach during ‘Kozmos.’ More copies were shipped to all corners of the globe. Musically, ‘Structures’ continued to up the intensity, but was a more refined effort. We paid more attention to vocal hooks, and further developed our guitar melodies. It was in essence a “richer” release. It too reviewed well, and we sent it to labels worldwide.

In 2003 a small label from Italy, Steelheart Reconds, heard ‘Structures’ and offered the band it’s first deal. Distribution was to be only in Europe, but it was a start and where much attention was coming from anyway. The label were a little hesitant to only release five songs though. Since we had already packaged and sold our “demo” in essence, they suggested adding ‘Kozmos’ to the release, and re-branding it with a new title and artwork. In the end we mixed it up a little further. A brand new track was written to lead off the album, hinting at the next progression we were eyeing musically. In addition to the ‘Structures’ material, two track from ‘Kozmos’ were added, but two live versions from a limited edition split we released in 2001 made the cut. This release came out late in 2003 and was entitled ‘Found on the Sun.’ During 2003 we wasted no time though, racking up more shows and road dates anywhere we could, including our longest tour to date, culminating with a third consecutive appearance on the main stage at Milwaukee Metalfest. Tours and road dates throughout this period were all self-booked. We simply did anything we had to for getting the best shows possible.

The following year saw us continue to play, but primarily write and record our first attempt at a full length album with the intention of licensing it directly to a label as a complete product. We weren’t going to self release and sell it prior. Musically, this was probably the biggest step we had taken yet. It would prove to be very inspirational and challenging to us as musicians, but eventually proved to be very divisive to our fan base. The album was ready to go in late spring of 2005, and we had a few brushes with larger labels but nothing materialized. Spirits were low, but we continued to forge ahead. A very strong appearance at the Chicago Powerfest continued to reaffirm our live reputation. Later in the summer of 2005 we got a bite from Belgium’s long running Mausoleum Records. We had just hired our first dedicated vocalist, so we retracked the vocal parts with him and the label released ‘Death of Awe’ in November 2005. ‘Death of Awe’ was easily the fastest and most intense thing we had ever done to that point. The influences from a hybrid of European thrash acts found their way into our writing, but we sacrificed none of the complex guitar melodies. They were just being delivered at a very high speed. Vocally we now had forged into the more extreme realm as well, something many fans had a hard time with. The record in general was a huge rush to record and of course perform live. It allowed us to play on an even wider range of bills. Another tour to the west coast in 2006 helped spread this very intense message.

We were to deliver another album within a year of the release of ‘Death of Awe,’ which stunted the amount of time we normally would spend supporting the record live. Eager to up the ante, we began to write an even more progressive and dense album, while sacrificing none of the sheer power we had discovered on ‘Death of Awe.’ We changed labels after the record was complete, which definitely slowed down progress. During that time we still managed to play a handful of choice shows to keep our live chops up. The record ended up releasing in March on 2009 on F-Bomb Records, and ‘Divisions’ was unleashed onto the world. We were the most musically proud of this album yet, and our live show became even more tight and intense. Reaction worldwide was still very mixed. Older fans still had the biggest leap to make, but there was now a growing cadre who understood our progression and realized no one in the US was doing what we were at the time. The album’s production was the best yet, much cleaner but heavier than anything we’d done before. We did manage to play a handful of local and regional dates, but no formal tour took place. We were motivationally exhausted at the three year span it took to get the album out. The songs didn’t feel very fresh by the time we could play them out either. Eager to wipe the slate clean we began writing yet another record with the intention of recording it much more quickly than previous efforts, and then putting forth all our resources into supporting this record while we were still excited by it.

An unfortunate lineup exodus then hit the band pretty hard. For the first time since our inception we actually took a couple month break to recharge and figure out where we wanted to go next. We rebuilt the band, but stopped at a familiar four piece again. It felt time to strip the sound down and dig into the earliest musical influences we had. We noticed through the past several years that metal had become a competition to reach it’s boundaries in almost every respect. A race to extremity. And of that, most band were just doing it for the sake of doing so, leaving only a few true innovators. This had all become a very, very serious affair. The rock ‘n roll in heavy metal was starting to disappear. Instead of pushing the extremes like we had been, we chose an alternate path. We began writing something completely different, which came together fairly quickly and enjoyably. We employed all the modern recording and songwriting techniques we had learned over the past decade, but applied them to a very different approach, our first concept record. The Great Bear is born now in 2012. We think it’s pretty heavy, and we think it’s pretty awesome. Like all our previous records we’re very proud of the lyrics, but this time it’s one large story line instead of several smaller ones. We think it has a strong nod to the spirit of metal gone yore but employs enough modern crunch and heft to appeal to core of a real metal fan. In the end, it’s always been and always will be about the metal we want to hear.

Being sci-fi addicts we took a historical turn with this album. Everything “Soviet” has always been fascinating to us as well, so why not marry the two? As history says the former USSR and the US went from allies to competitors immediately after WWII…eventually becoming cold war foes. This of course was most publicly displayed in the space race. We chose to chronicle this race in our new album, but told from the perspective of a test pilot turned cosmonaut in the USSR. The Russians beat the US to most every major accomplishment out of the gate. But in 1969 we finally one-upped them by landing on the moon, and it was never answered. There are reasons for that, but we chose another path. We decided to say “what if” the Russians did indeed try to do something even more grand? After much research we put together a story, as believable as possible, to describe if the Russian space agency would have taken that bigger step. The mission, which truthfully isn’t that far fetched from reality, is entitled The Great Bear.