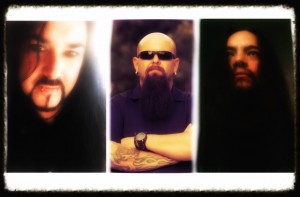 From the dirty, hot and dry valley riddled with drugs, violence and crime of Bakersfield California a band was formed by a man that came from the complete polar opposite. Thawed and frustrated with being cold and in the dark his whole life he emerged from the vast frozen wastelands of Alaska. That man was Scotty CH and the band is The Secret VI.

Scotty’s introduction to the metal world at large was via Capitol Recording Artists OTEP, with whom he spent three years touring the world.  Frustration set in with not doing the music he really wanted to do and he left that band in 2009 and began writing short stories.  It was one of these stories that lent its title to his new band, naming it The Secret VI “It was about six people that happen to be the shot callers for the Police State of Oppression,” he states. Through his vision and sleepless night after sleepless night Scotty, together with singer Marc Padgett, created the band’s debut album, ‘Eclipse of the Soul’ in 2010.

Padgett, hailing from central California tends to pull his creativity from a bi-polar disorder. ”Writing and performing music helps me release emotions that I’m unable to unleash any other way, “says the frontman.  “Being able to create is something that only comes around here and there for me and I never want to miss the train once it starts rolling.

After the release of ‘Eclipse of the Soul,’ however, Padgett disappeared for about two years.  “It was purely a business decision based on the circumstances I was in at the time,” tells Padgett.  “Things not working out the first time around was never a personal thing between Scotty and myself.  Because we were able to remain friends and keep the business separate it worked out great that a couple years later we’re now back together as a band and doing better than ever.

Scotty slipped into a depression and began writing in a more aggressive manner, focusing more on a death metal direction for their next writing sessions.  “I love all kinds of metal, including bands like Morbid Angel and Slayer,” says Scotty, “so my writing took a swing in that direction for a while.” During this time he met Bakersfield native, Rick Lozano who came aboard to fill the then vacant bass slot in the band.  “I grew up listening to Led Zeppelin, Black Sabbath and all those classic bands which made me want to join a band and then discovering the Red Hot Chili Peppers and Primus drove me towards playing bass,” says Lozano.

Towards the end of 2013, Padgett found his way home and the band entered B2 Studios in Bakersfield, CA to begin work on what would become their second official release, Mixed Episode.  Moving back towards a melodic metal direction, Mixed Episode shows the band writing and playing at the top of their game.

Electing to go with a three song maxi single / Ep “because we wanted a quick statement showing the diversity with which we write,” says Scotty. “We’re artists, we can write and play in any style, melodic, heavy, whatever.  We’re not afraid of judgement.”  Mixed Episode opens with the mid-tempo rocker, “Plastic Smile” – It’s about all the fakes in life, in Hollywood, and in general,” Says Marc. “I’m simply stating I can be fake as well if that’s what is needed for success. Haha!”   before launching you unsuspectingly into the near rap metal meets industrial metal skull crushing “You’re All Bark” (just a catchy way of letting that wannabe badass know that I know they’re not going to do shit to me. So don’t bark at me if you haven’t got any bite to back it up.)   Rounding out Mixed Episode is “My Two Cents”, the most aggressive track on offer (“about being the black sheep of pretty much any situation you find yourself in. Family, circle of friends, or even strangers, it makes no difference. The role remains the same”)

Mixed Episode may see THE SECRET IV heading in a more commercial direction than they have been leaning towards in the past couple of years but they’re far from selling out. “This album is all over the board in terms of style and vocals,” says Lozano. The vocals have taken a new direction in aggression and feeling all together. The music has become more melodic and angry at parts, while toning it down where is needs to be for more of a dynamic. The material has something to offer to all types of listeners – it’s not predictable in any way and will live up to the title of Mixed Episode.”