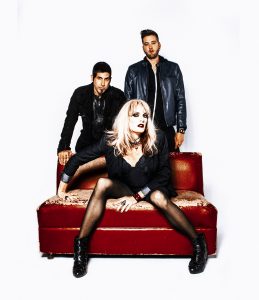 Pulling their name from a newspaper headline that read: “Lucid Flies into the Record Book,” about astronaut Shannon Lucid, melodic prog rockers Lucid Fly founders Nikki Layne (vocalist) and Doug Mecca (guitarist) were obviously onto something very unique from the start.Starting their musical journey in Orlando, FL, they steadily built a strong and loyal following throughout the Southeast and Midwest through constant touring; the band cut its teeth performing throughout the region on a regular basis and working their way up to larger clubs along the way, as well as expanding their fanbase out to Atlanta and Austin, amongst other cities. In 2005 they released their debut Ep, ‘Adapting to Gravity,’ which was met with overwhelming praise from fans throughout the region.

2007 arrived and Layne and Mecca realized that they had taken things as far as they could in their hometown and surrounding areas and decided they needed to uproot, setting their sights on the West Coast. “We wanted to jump into a more challenging scene where many musicians went for the sole purpose of taking their music further. A change in scenery seemed to fit our ever-changing way of songwriting, and we were looking to try that outside of our home comfort zone so to speak,” says Doug. “We really wanted to be where the caliber of musicianship was known to be top-notch and where there is more opportunity in general,” adds Nikki.

Los Angeles, CA to be exact.

Leaving the Sunshine State for The Golden State, the duo landed in the city that has spawned millionaire rock stars and has broken the souls of so many others. Within two months they met seasoned drummer Aaron Ficca and they were off and running. Culling a new band together, Lucid Fly v2.0 began setting LA on its collective heel, hitting local venues such as the legendary Key Club and Roxy as well as the iconic Viper Room, and releasing ‘The Escape Stage’ in 2009. The Ep was met with fan and critical praise, further reinforcing the band’s faith in themselves. “The bar was definitely higher in LA across the board, as far as talent, ambition, showmanship, experience, and the level of performance. We’ve taken all that in as part-education part-inspiration to elevate everything we had done before, and to truly find our voice in our creative process,” clarifies Nikki.

In 2011, the band started experimenting with new material and began developing a new way of writing together, all the while doing a short stretch of stripped down performances to refine their new ideas. “We learned to use technology to manipulate our live ideas and then bring them back into the rehearsal room,” says Doug. “We were working on our more current sound which started to show a little on ‘Stasis.”’

Lucid Fly was also hand picked by Mike Portnoy to participate as part of 2014’s “Progressive Nation at Sea” cruise, performing on the New Millenium Stage alongside 16 other artists, which was a huge shot in the arm for the band. Layne and Mecca reflect back on that cruise: “It was our first international gig, an amazing 4-day musical vacation, full of nonstop live music, food, sun and like-minded music lovers – we made some new friends for life. It was truly an unforgettable experience playing alongside amazing bands like Animals as Leaders, Periphery, Riverside, Devin Townsend, Jolly, The Dear Hunter, Anathema, Jon Anderson and many more!”

With new full length album, Building Castles in Air the band self-produced and recorded in several studios throughout Southern California and Oregon, as well as their own home studio in Los Angeles. “Making all the decisions proved to be tough as it allowed us to explore more than ever before, which meant we had to have the discipline to reel it in and complete what became the biggest recording project by far to date,” explains Doug. They discovered that some of the major differences included the fact that none of the ten tracks on the album had been performed live and time was a major factor, as was budget, of course. “Luckily we had quite a bit of help courtesy of our amazing fans and a very successful IndieGoGo campaign,” relates Nikki. “We had 100% access to Flabbey Road Studio to do everything possible in a week. It had a great big room so we focused on all the drum tracking. Guitars were done in the home studio, then bass and vocals had to be scheduled around the crowdfunding campaign. Then a final pass with overdubs and editing gave us more input and time to finish these songs than any previous Ep. It was also the first time we tracked and edited ourselves for much of our own recording! How’s that for stressful? Haha.”

They once again turned to ARIA-nominated Savell to mix and master the new album. “He’s brilliant when it comes to mixing and we love his taste in everything he’s had his hand in,” says Nikki. “We went much deeper than we ever did before, layering in ambience and sounds and space, and we knew we could trust that the final mix would come back with everything in its perfect place.”

With Building Castles in Air, Lucid Fly moves the bar a bit higher, challenging themselves more, both musically and emotionally, than they ever had before. Hitting off with “Billowy and Broken,” (about finding a silver lining in life no matter what you may be going through) after which the band launches into “Circles Into Squares,” which touches on self-expectations and where you are at the present time with these ideals, while the album’s first single, “Visions of Grandeur” takes the mantra “If you can dream it, you can do it” to a whole new level. Regarding the album as an entirety, the band says, “We wanted the music to tell the story, through more than just the words. Sonically, we experimented a lot with guitar and vocal tones, dynamics, and layers to capture some of the contrasting themes throughout the album – introspection, melancholy, longing, daydreaming, transformation, and a sense of hope and optimism.”

Drawing influence from artists as varied as A Perfect Circle, TesseracT, Journey and Pat Benatar allows Lucid Fly to open up a bit and not necessarily be pegged as a prog rock only band. “There is definitely never a shortage of musical inspiration out there, and every time we are in creating mode we try to approach things differently in some way.” says Doug. “On this album, musically we definitely stretched our use of time signatures and experimental arrangements, which gave the vocals an added level of playroom but also a challenge to create a listenable and deliberate melody. The tools we used, in particular the Fractal Axe-Fx, gave us an additional palette of sounds to write with, essentially adding another instrument to the band. Ideally we’d love to add another player live and take that idea even further.”

The band says, “Since the beginning we’ve had a drive to express a style unique to Lucid Fly. That same ongoing passion to create fuels a future of music waiting to be written, recorded, and performed for years and ideally, decades, to come.”