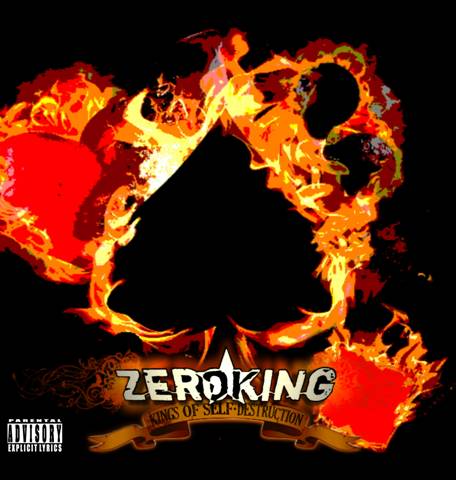 “Showtime! The world is yours, go on and take it!” thunders frontman Andy Haught on the brand new track “Showtime”, words that capture the vigor, swagger, and brazen rock flare of Huntington, West Virginia-based ZeroKing.

New school embraces the old school, and out comes an irresistible sound that combines the best elements of classic rock heroes Guns N’ Roses and Motley Crue, and mixes them with the vanguard aspects of modern rock powerhouses Buckcherry and Hinder. The quartet ZeroKing have a firm goal in mind with their sophomore effort, Kings Of Self Destruction. They are committed to taking their original brand of hard rock/metal anywhere and everywhere, and they’ve amassed the rock credentials to do it. As the lyrics go in the song “Dead Rock Star”, “I’m a sexy, revolutionary mother f*#$%^, with a head for games, and a great imagination.” What self-respecting rocker can turn down qualifications like that?

Formed in Huntington West Virginia in early 2005, the band has shared the stage with artists such as Anthrax, Twisted Sister, Bobaflex, Jackyl, Dope, Black Stone Cherry, Airbourne and many more, becoming the “go to” band for regional promoters needing a secure draw and an act that can step into the ring with anyone. The band has gone on to play events such as Rocklahoma, X Fest,103.1 The Bear’s ‘Party Like A Rockstar’ Festival, and Bearfest, amongst a host of other high profile events.

Releasing their debut Ep, ‘Sweet Sale Of Excess,’ in 2006, to critical and fan praise across the board, the band moved no less than a couple thousand copies at shows throughout the Mid Atlantic region. As impressive as the sales of the EP were, this was only the foundation for what was to come next.

In the summer of 2009 ZeroKing entered Smash Hit Studios in Huntington, WV., to begin tracking the Kings Of Self Destruction album with producer and engineer Steve Riley. Comprised of 13 tracks, the session produced a tour de force of hard rock and metal. From anthemic rockers, to songs chock full of heavy metallic riffage, the album contains more than enough to satiate fans of new school, old school, and everything in between. As if all that wasn’t enough, the session produced a couple of melodic, captivating ballads, showcasing yet another strong dimension of the band.

The overwhelming consensus by all who had the privilege of advance previews of the new music? Not one filler track to be found!

The band released the first single, “Stone Cold Bitch” b/w “Girls of California” in digital format, and then let loose with a salvo of three more tracks in the spring of 2011 for their Ep, A Taste Of Self Destruction; “She Said”, “Black Friday”, and the title track of the forthcoming CD, “Kings of Self Destruction”.

Immediate praise flowed towards the band in abundance, as they engaged in the onset of a heavy spring gig schedule. The live shows are set to continue all throughout the summer, including invitations to marquee shows such as Louisville’s Fandom Fest/Fright Night Film Festival, a mega-event that features over 5,000 attendees and a spectrum of Hollywood celebrities.

So get ready to party like a “Dead Rock Star” … ‘cuz this is the breakout year for the “Kings of Self-Destruction”!