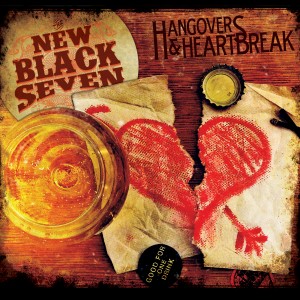 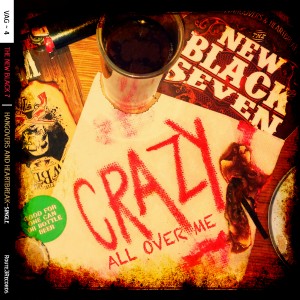 The New Black 7 is an intoxicating dose of country music with a shot of 90 proof rock & roll added for good measure. Honest and true, sad and melancholic and simultaneously energetic and catchy, the songs are everything that great country music should be. But there’s a little something extra as well… the intangible; it’s that sizzle of magic that only happens when people who love the music they play get together and make it happen. “Back in 2011 when NB7 was doing a show in Iowa, I came down to hang and was asked to sit in for the night,” reflects, guitarist, Jason Herman.  “After 45 minutes of ripping through the first EP, and “cutting heads” (dueling) with Tory, I was asked if I was interested in joining the family.  I always loved the vibe of the band, and that night felt right.  So of course, I joined The New Black 7 circus.  Between Tory, Brentt, and myself we have a ton of live experience under our belts, so that part comes natural to us.  On our first songwriting session we knocked out 7 solid song ideas in an afternoon sitting around a piano with a mandolin, and a couple of acoustic guitars.  That’s when we all knew, as a whole, we had the main ingredient needed for a successful band; the gift of writing great catchy songs that everybody can relate to.  And now the rest of the story continues to write itself!”

The journey began in 2010 with the release of their solid debut Ep, “The Old Becomes New.’ “We wrote and recorded the songs on the first CD really quickly,” says lead vocalist and guitarist, Tory Stoffregen. “As much as we love the creative process of being in the studio, we wanted to get out there and feel the energy of a live crowd.” The NB7, as their friends and fans have lovingly christened them, continue to grow their loyal fan-base and pursue their song craft with a batch of tunes that are full of life, piss and vinegar, truth and consequences and heart and soul.

The band understands fully that no one can reinvent the country music wheel but they are definitely throwing on some new tires along with a new paint job and a tune up too. “Music is timeless, great songs are timeless, “relates drummer, Brentt Arcement. “But there is something about arena rock anthems that just make you want to jump out of your seat, and at the same time there is something about a great country song that makes you think, remember and cry. That’s what our new album is.”

The eight song Vanity Music Group debut affair, Hangovers & Heartbreak was recorded at Chandler Limited Studios in Shell Rock, IA, produced by singer / guitarist Tory Stoffregen and Wade Goeke and mixed by Cedrick Courtois (Destiny’s Child, Beyonce, Earshot).   The band had the privilege of having percussion legend Jackie Bertone (Tower of Power, The Beach Boys, Justin Timberlake) lay down percussion on all tracks. “I became acquainted with Jackie in 2001,” Arcement says. “He was doing Tower Of Power dates as well as the Henry Kapono gig. He came down to a club I was playing and we just really hit it off. He’s an amazing person as well as musician. I just wish we could have worked together sooner, but this will be one of many!”

With songs like “Crazy All OverMe” (“The upside down relationship song everyone can all relate to. Growing up and living in a small town we all know this person and maybe it is even one of us who gets a little crazy when it comes to the opposite sex. We have all seen those friends and have surely been that

friend at one time or another”), “That Don’t Sound Like Country” (“Inspired by a radio dj who told us we weren’t country enough on the first CD, We turned on country radio and to this day wonder what he was

listening to. Growing up we were all exposed to all different kinds of music and it all mixes together to make The New Black 7.  Call it what you want.”), and “Closing Time” (‘A scandalous romp through every bar in America on a Friday night! A fun song that would make Dwight Yoakam or The Beatles equally as proud”) as well as a red dirt style cover of Motley Crue’s classic “Kickstart My Heart“, Made up of equal parts Shooter Jennings, Blackberry Smoke and .38 Special, Hangovers & Heartbreak is designed to give you a swift kick to the backside

The New Black 7 plays music that continues to challenge us to have a good time, raise a little hell when the opportunity presents itself and to not be ashamed to let it all hang out once in a while. But the music also inspires us to cherish what’s real in life, to do what we feel is right and to be better people when the going gets tough.  It’s meant to take you away from your cubicle, away from your Starbucks, away from that boss that keeps telling you what to do and transports you to a happy place – a place where the beer is cold, the sun shines and the breeze blows across the fields in the afternoon. This is the place where Friday nights are for attending high school football games and partying with old friends. The New Black 7 stand for the good things in life.

Tory Stoffregen concludes, “The good life to me is putting a smile on someone’s face who can relate to a song we write.  Hitting that last chord of song and seeing all the smiling faces, telling me that we all share a common experience. That stays with you and makes us feel like its all worth pouring our hearts out on the stage for everyone to see. Music is about bringing people together and I have never felt a connection like this before, Life is good.