OUTLAWS & MOONSHINE’S ‘DEVIL IN THE MOONSHINE’ IN STORES TODAY 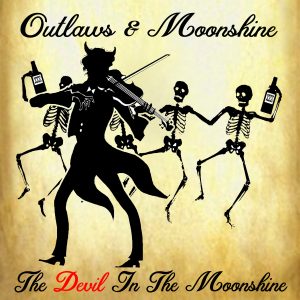 Indianapolis Southern Rockers OUTLAWS & MOONSHINE have released their debut full length album, Devil in the Moonshine through Nemesis Records / Vanity Music Group, distributed by AISA – The Orchard / Sony Music. A sampler of the album can be found here.

Produced by Vic Rivera at Red V Studios in NYC, Devil in the Moonshinebridges the new southern rock revival of acts such as Blackstone Cherry and Blackberry Smoke with classics of the genre, like .38 Special and Blackfoot.  “Vic is hands down the sixth member of O&M,” says frontman Beau Van. “The recording process was laid back yet driven at the same time. There were many long hours of ‘let’s do that again’ from Vic. He has faith in the band and has a complete understanding of our vision.

Devil in the Moonshine is comprised of five brand new songs coupled with five songs from an independent release from 2015, which were remixed and remastered for a fuller and consistent sound and “besides, there are a lot of people we didn’t get to reach with those songs the first time around,” remarks Van.

Devil in the Moonshine Tracklisting:

A video for the album’s first single and title track has been shot and will see a release in early December.

Devil in the Moonshine can be found on iTunes, ordered from the .Vanity Music store), and in stores throughout North America.