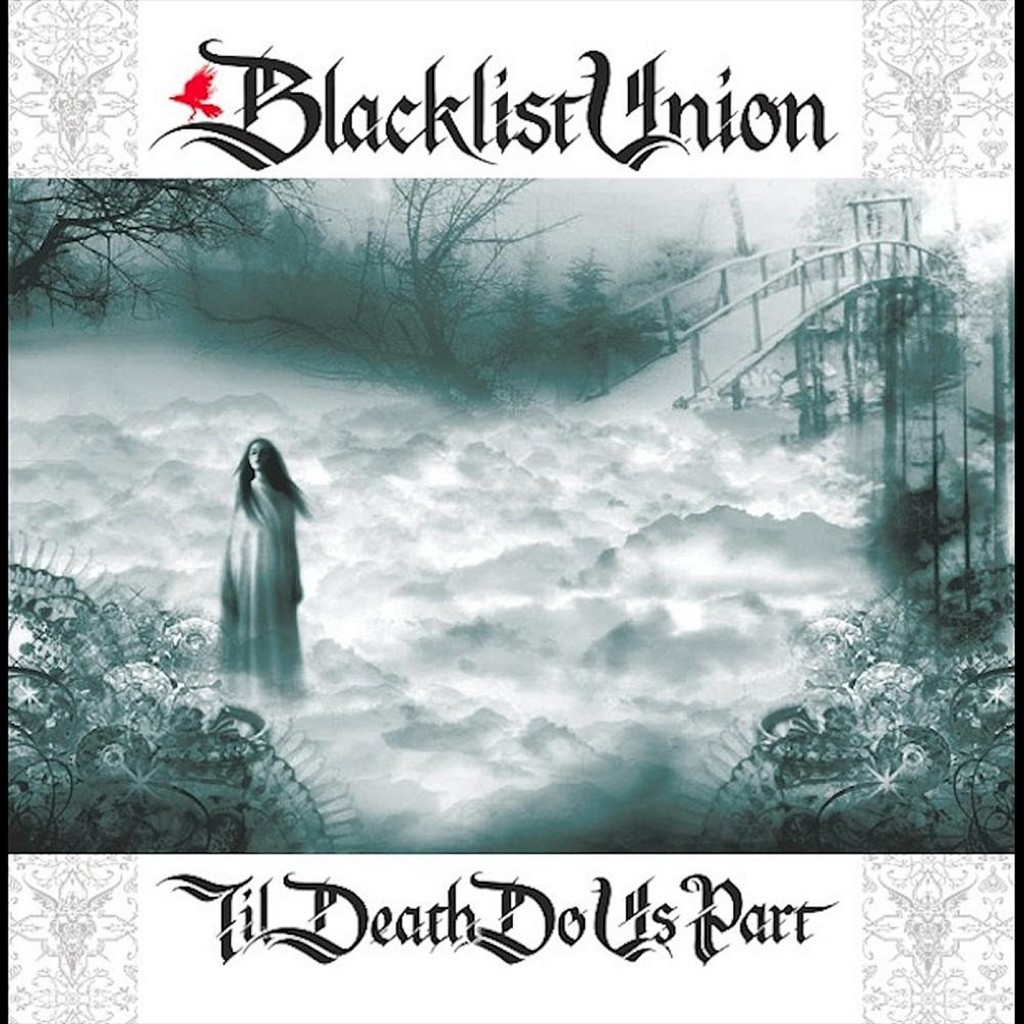 (25 July 2013 – Los Angeles, CA) Hollywood based hard rockers Blacklist Union will have their latest album, ‘Til Death Do Us Part available in physical retail outlets on 30 August via a distribution deal with Vanity Music Group and iDC Distribution. Produced and mixed by Chris Johnson (Buckcherry, Evanescence, Goldfinger, etc) and recorded at Skip Saylor Recording and The Village in Los Angeles, CA. The album takes the listener on a dark, disturbing and exhilarating run through songs like “Alabama Slammer” (a tragic love story that started off beautifully only to have a bitter crash and burn at the end), “I Do” (a song about “waking up after having your head in your ass for years,” says frontman, Tony West) and the album’s title track (about loving and living your life to the fullest before we all “cross over”)

“This is a great opportunity for us,” says frontman, Tony West.  “We released the album ourselves towards the end of last year but it was really just sold through our website and other online stores, as well as iTunes.  Now, it gives us another reason to get back out on the road, which is what we love the most.  It’s just great that album is available in physical stores now.”

Blacklist Union is looking to take to the road once again by early fall.

Jul. 25 News no comments
(25 July 2013 – Staten Island, NY) The Infinite Staircase, comprised of brothers Lenny & Jeff Cerzosie, have released their first single since February’s Top 40 Mainstream Rock Radio Single “The Pride” which features Zakk Wylde, Kevin Martin (Candlebox, The Gracious Few), Morgan Rose (Sevendust, Call Me No One) & John “JD” DeServio (Black Label Society, Cycle Of Pain). The new single, “The Things We’ve Done” (a nod to The Infinite Staircase’s debut album ‘The Things We Do’), features in addition to the band’s recording drummer Morgan Rose, fellow Sevendust bandmate Lajon Witherspoon, Savatage/Trans-Siberian Orchestra guitar virtuoso Chris Caffery and Cycle Of Pain keyboardist Troy Cromwell.Released via The Infinite Staircase, Inc./ Vanity Music Group the single is currently available for $.99 on iTunes (https://itunes.apple.com/us/album/things-weve-done-feat.-lajon/id678317107) Amazon.com (http://www.amazon.com/gp/product/B00E55CE46/ref=cm_cr_mts_prod_img) & CDBaby (http://www.cdbaby.com/AlbumDetails.aspx?AlbumID=theinfinitestaircase) and will be available at all other digital retailers over the coming days and weeks. A teaser video has been posted to the band’s Official Youtube Page and can be seen here:

In the meantime, a lyric video is expected to debut within the next week or two and an official music video is also in the making.

“The Things We’ve Done” comes as the band readies to release their long awaited new Ep, No Amends.

No Amends was recorded at Architekt Music, the state of the art recording facility in Butler, New Jersey where Sevendust recently tracked ‘Black Out The Sun.’ It was mixed by house engineer Mike Ferretti (Sevendust, Call Me No One) and mastered by UE Nastasi (Lamb Of God, Panic! at the Disco) at Sterling Sound in New York. The Ep will be released this fall via The Infinite Staircase, Inc. / Vanity Music Group. and will feature collaborations with a slew of musicians including Morgan Rose (Sevendust, Call Me No One), Lajon Witherspoon (Sevendust), Clint Lowery (Sevendust), John “JD” DeServio (Black Label Society, Cycle Of Pain), Chris Caffery (Savatage, Trans-Siberian Orchestra) & Sean “Memphis” Hennesy (Candlebox, The Gracious Few) amongst others. 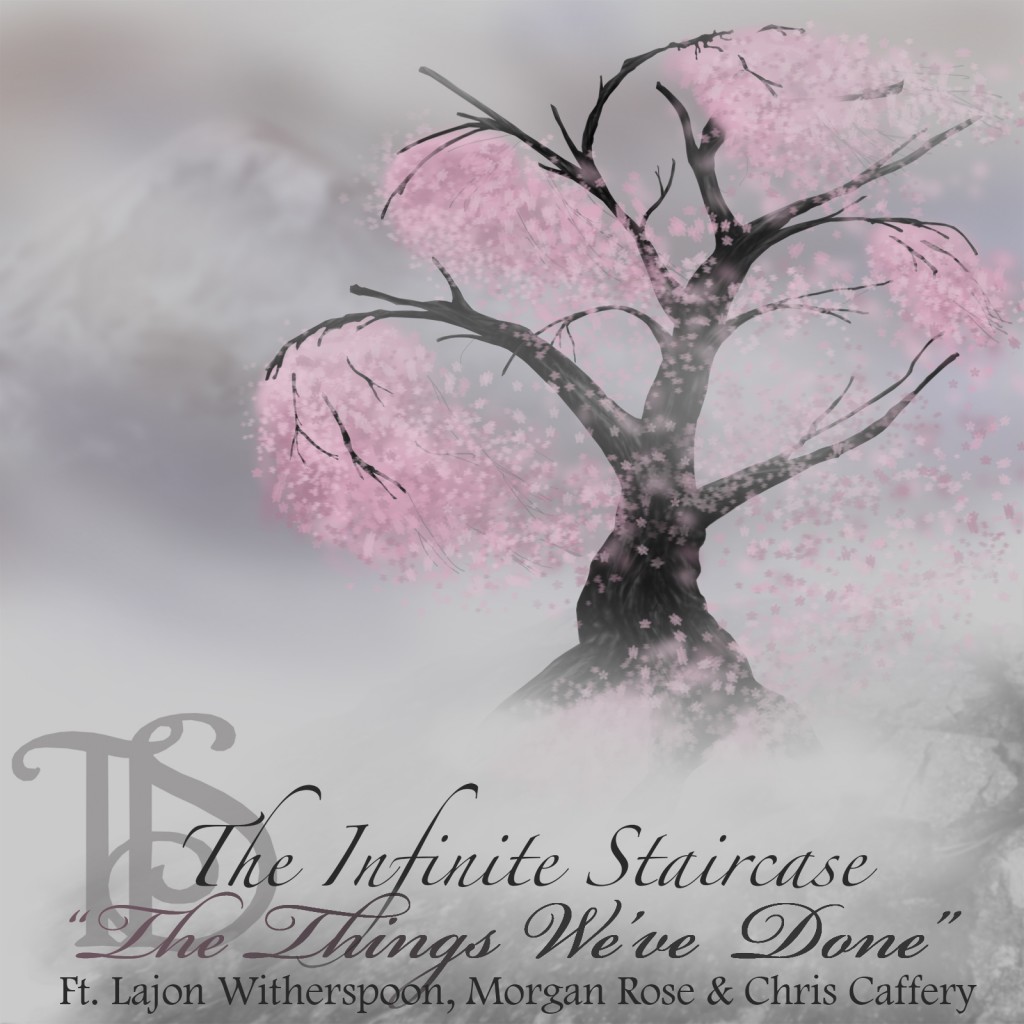 Head on over to www.kwwr.com and check out New Country at Noon featuring The New Black 7!  The station is in the city of Mexico, MO (just outside of Columbia) so that would be noon CST – go check it out!

Lowery plays on the track “Can’t Control It”, while Witherspoon sings alongside The Infinite Staircase frontman Lenny Cerzosie on “Just To Meet You There” and what has now been confirmed as the forthcoming new single, “The Things We’ve Done”.

These collaborations mark the finishing touches on the band’s forthcoming as yet untitled Ep, which is expected to be released in late summer or early fall with the first single hitting radio within the next few weeks.

The Infinite Staircase has made a habit in recent years of collaborating with some of the most respected musicians in hard rock and heavy metal. In 2009, the band’s debut album ‘The Road Less Taken’ featured guest appearances by Blues Saraceno (Poison) and Earl Slick (David Bowie, John Lennon). Saraceno also mixed the record.

In 2012 the band began work on their follow-up with Sevendust and Call Me No One drummer Morgan Rose at the helm, producing as well as taking charge behind the kit. Early sessions brought in collaborations with Sean Memphis Hennesy (Candlebox, The Gracious Few), John “JD” DeServio (Black Label Society, Cycle Of Pain) and Troy Cromwell (Cycle Of Pain).

Then, on October 22nd, 2012 came Hurricane Sandy and The Cerzosie brothers found themselves organizing an All-Star collaboration to raise money for the victims of the storm; a collaboration which consisted of, in addition to Morgan Rose and JD DeServio, Guitar God Zakk Wylde and Candlebox frontman Kevin Martin. What resulted was “The Pride”, a melodic mid-tempo rocker with blazing solos and screeching vocals which spent 6 weeks on America’s Music Charts’ Mainstream Rock Radio Top 40 with it’s highest ranking being #27.

“The Pride” was released digitally on February 5th, 2013 via Vanity Music Group with 100% of the proceeds being donated to the Carl Vincent Bini Memorial Foundation. The song was recorded at Architekt Music, the state of the art recording facility in Butler, New Jersey where Sevendust recently tracked ‘Black Out The Sun’. It was mixed by house engineer Mike Ferretti (Sevendust, Call Me No One) and mastered by Alan Douches (Fleetwood Mac, Yes) at West Side Music in New Windsor, New York. The song is available via digital retailers such as iTunes, Amazon & Google Play, or a limited edition CD Single can be purchased via theinfinitestaircase.bigcartel.com.