(15 January 2013 – Staten Island, NY) The project comprised of the NY based band The Infinite Staircase along with Zakk Wylde (Black Label Society, Ex-Ozzy Osbourne), Morgan Rose (Sevendust, Call Me No One), Kevin Martin (Candlebox, The Gracious Few) and John “JD” DeServio (Black Label Society, Cycle Of Pain) has completed work on the single, which is now called “The Pride.”

Co-writer, singer and guitarist, Lenny Cerzosie explains the meaning of the song title and the process in which he and vocalist, Kevin Martin took to get to that conclusion. “In terms of the writing process and the meaning behind “The Pride”, which the coolest thing about it to me is that it was written by all of us, it was a group effort and where I see where it started was Kevin, being the one who technically is not necessarily from the area but has very close ties and of course it touched home to him, but he said “tell me what you guys experienced, tell me what you guys saw, tell me what you guys heard, tell me what really went on, what people didn’t see, what did you guys see, the home, your neighborhood. Everything that we were saying, he’s just jotting down ideas…we had a whole bunch of ideas. He had a couple of pages full of just ideas, whether it be the names, different things, the topics we wanted to touch; One of the main topics was about how the streets, the beach came all the way to the major boulevards. The streets and our home and our memories, those are all the main topics, the things that Kevin felt, that we all felt, those were the things to talk about. Kevin really took charge of, well let’s now put these things in some kind of order. We were talking about the chorus. So we were talking about the flooded streets and what the chorus has to be, it has to be the hope part. He’s like “These are our streets, this was our home” And I said, you know what, that’s awesome but what about “These are our streets. This IS our home.” ‘Cause even though it’s washed away, it’s still our home. He was like “Yeah, you’re right! Let’s do that!” It kind of flowed where he said, “Yeah, we are the pride.” And I said “Yeah, because New York, New Jersey, Philly, you know, we’re all about the pride” – he’s like “Yeah, but I’m talking about the lion’s pride, like the lion’s den. Forget FEMA and Red Cross and everybody else- that we take care of our own. We’re here for a reason. We are the lion’s den, the lion’s pride, that’s what it’s about. It’s the roar. It’s the pride.” I thought that was very cool. I think in the end, that’s going to be what really touches everybody; that we’re all in this together. This was a group effort and we’re all going to take care of our own and each other and that’s what the song really comes down to, it’s all about the pride.”

The track was recorded with Mike Ferretti at Architekt Music in Butler, NJ where Sevendust recently wrapped the recording of their new album, ‘Black Out The Sun’ and The Infinite Staircase continue to work on their new album.

“The Pride,” originally set for release on January 8 is now slated for a release date of February 5 through Vanity Music Group. Jeff Cerzosie of The Infinite Staircase explains “We wanted to get this out there as quickly as possible but also didn’t want to sacrifice quality for speed. Getting everyone together on this project and bringing in the right charitable organization while trying to ensure that we deliver something worthy of those who have suffered and lost everything was something that we all felt very strongly about. After all, we’re hoping to change at least a few lives through this project and to do that, everything needed to be perfect.”

It will be released as an iTunes exclusive and 100% of the proceeds will be donated to the Carl V.Bini Memorial Foundation for distribution to those affected by Hurricane Sandy.

“Living on the Jersey shore my entire life, I was mortified at the after effects of Hurricane Sandy,” says JD DeServio.
“It was heart breaking to see all the lives that were affected throughout the tri-state area. Hopefully the song we recorded will benefit some of those unfortunate people. God bless.”

Lenny Cerzosie – “Since we are talking in terms of the pride, the lion’s pride, the lion’s den type of mentality, it’s nice to know that the Carl V. Bini Memorial Foundation is based on the idea of a hero from 9/11. To work with a foundation like that, that’s already something that of course anybody, especially a New Yorker, would be proud to be a part of, it’s nice to know that we have 100% confidence that all of the money that’s going to be raised is going to go directly to people who need it and it’s not a corporate entity where money’s going to be laundered here and there and the other way. The musicians involved did not take a penny, did not ask for a penny, did not expect a penny, some of us even took pennies out of our pockets to make this happen. It’s great to work with a foundation like this. They’re so excited. They’re on board with us. It’s great to work with guys like this who are open to the musicians that are involved. It’s not corporate BS. It’s a sincere movement, a sincere group and I think in the end that’s what’s going to make this project successful; that everybody involved is 100% sincere and 100% authentic and that’s what’s going to make all the difference.”

The Carl V. Bini Memorial Fund was founded in honor of Firefighter Carl V. Bini, a member of the FDNY tragically taken during 9/11. The fund’s mission is to memorialize the heroism of its fallen hero by providing aid to those who so desperately need it now and in the future. 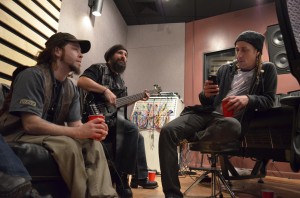 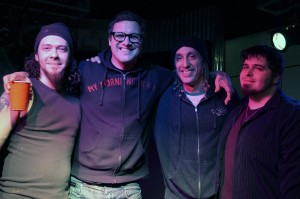